When President Lyndon Johnson spoke those words before a Joint Session of Congress, he made the cause of overcoming injustice the cause of all Americans.

Johnson began his quest for a more just and honorable America with the passage of the Civil Rights Act of 1964, the most transformational civil rights legislation since Reconstruction and a crucial step in the realization of America’s promise. In the years that followed, LBJ passed the Voting Rights Act of 1965 and the Fair Housing Act of 1968. Together, this triumvirate of laws would ban discrimination based on race, color, sex, religion, or national origin.

On April 8-10, 2014, the LBJ Presidential Library hosted a Civil Rights Summit to mark the fiftieth anniversary of the Civil Rights Act of 1964. The Summit, comprised of afternoon panel discussions followed by evening keynote addresses, reflected on the seminal nature of the civil rights legislation passed by President Johnson while examining civil rights issues in America and around the world today.

The Civil Rights Summit was this year’s cornerstone event of a multiyear anniversary celebration of President Johnson’s prodigious legislative legacy. Throughout the course of the next several years, the LBJ Presidential Library, the LBJ School of Public Affairs, and the LBJ Foundation will partner to commemorate the anniversaries of seminal laws signed by President Johnson that continue to resonate today. 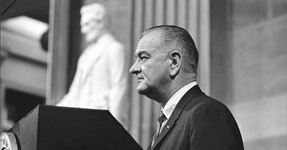